The Client for Eulora2 in Glorious Detail (and Picture!)

~Referencing, of course, the previous version of EuCore and even that very beginning of creating a useful structure to it all.~

As I've opened up a test environment for helpful people to give a go to the latest client, they are likely to benefit as well from an updated and more comprehensive overview of the full client code, as an initial map of sorts, at the very least. So this is what I'm aiming for with this article - to provide an up to date map of the current client and a place for questions and answers on it all, in the comments.

While the previous article focuses exclusively on the EuCore part, meanwhile I really had to deal as well with the GUI part, as there wasn't anybody else doing anything about it otherwise. So the GUI part got significantly trimmed, mostly overhauled and otherwise changed from inside out to provide the sort of flexible and reasonably structured functionality that I need as opposed to the assumptions-ladden and spaghetti-shaped sort of "service" that was previously available. As a result, out of all those half a million lines of code and countless files, there are now... 40308 lines of c/cpp code in total remaining. More than half of this (27584 lines according to a wc run currently) is in fact the only remaining sprawling mess that got now at least insulated in its own directory, namely the PAWS horror. In more practical terms though, there are 11 classes that are almost entirely re-written and make up the bulk working part of the GUI, 2 classes (one entirely new and one adapted) for providing the whole set of views, windows and overlays that Eulora2 needs and otherwise a bunch of the remaining "utility" classes that are quite often simply dragged in by various spidery includes of the PAWS variety. Here's the full remaining tree of the GUI (ie the C/CPP part of the client):

The main method is in psengine.cpp1 and that starts and initializes everything needed, then enters the loop provided by the graphics engine and at the end cleans up whatever is left. The first initialised is the graphics engine, CrystalSpace and that comes with its own "object registry", configuration and initialisation dances that have been however trimmed to a minimum and corralled into a single method (and a single, shared configuration file, too!) that is hopefully reasonably easy to read. After that, the Ada part of the client, namely the EuCore library (see below for more on its role) is given the green light to start and provided all goes fine, the next steps are to simply initialise the GUI logic that is in psengine itself and then to enter the CrystalSpace loop that runs for as long as the game is running.

The GUI part has the following main components:

While the above GUI part focuses exclusively on the interaction with the user, it relies on the separate EuCore library to communicate with the server and to exchange and obtain all required data. The EuCore library handles everything in this respect, including creating a RSA-based identity and account, initiating and maintaining fully encrypted communication with the server, obtaining and updating all data related to the game's world as available at different times to the player, retrieving from the server through the same encrypted communication any missing files and managing existing local files including their use as temporary defaults when needed and where appropriate. The full EuCore weighs in at about 27000 lines including tests and the mpi part that has about 8000 lines of code by itself. Here's an updated full picture of all Ada package dependencies: 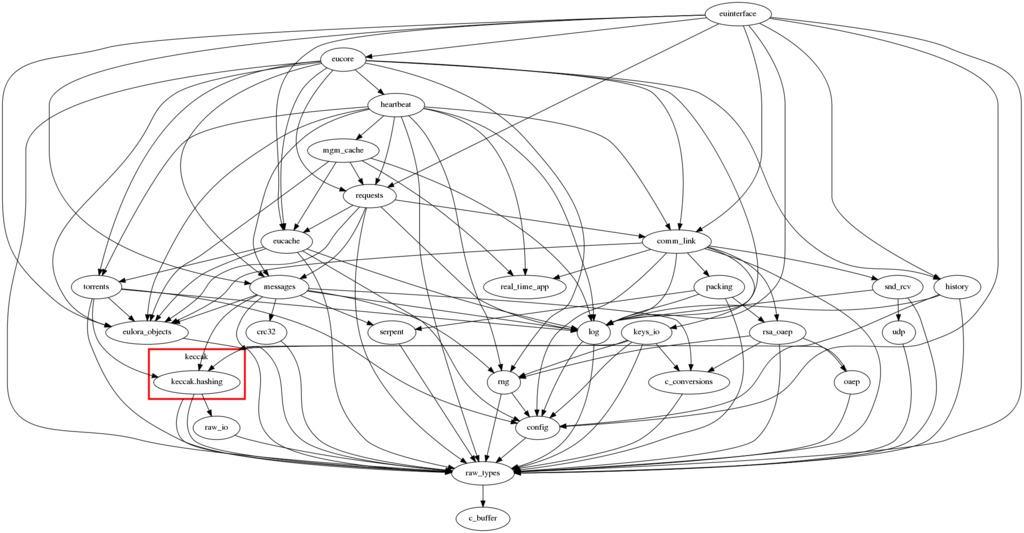 Compared to the previous version, there is a striking change at the top where EuInterface is now the "entry" package instead of EuCore. This reflects actually better the meaning of the two packages and by now the whole code matured enough so that the refactoring was quite obvious, too. Basically EuCore is the starting package for the whole library, while EuInterface literally provides an entry point for any C code that wants to use the library and this includes now the previously missing C-compatible wrappers for EuCore's Start/Stop methods themselves. Thus any Ada code that uses this library can entirely discard EuInterface and just start with EuCore, while any C code using this library goes entirely through EuInterface and doesn't need to see or know of anything else.

Further comparing with the previous version of EuCore, there are also a few new packages, most notably Mgm_Cache that comes now between Heartbeat and EuCache, as well as C_Buffer at the very bottom. The C_Buffer package is literally for interfacing with C code so that Ada code can take advantage of faster writing to files mostly. The Mgm_Cache package does what the name suggests, namely provides the higher level logic to oversee the data cache that is EuCache itself. In fact, the Heartbeat package serves as on overall coordination mechanism across the whole of EuCore and as such it effectively provides regular calls as required to various parts such as the communication link (Comm_Link), the data cache (EuCache) and the assets downloader (Torrents). As the communication link is both the most critical and the most demanding component of these, the Heartbeat really grew first of all as a manager of Comm_Link and only once that was fully working the rest could be developed as well. At the moment, the management of EuCache grew big enough to make sense to extract it in a separate package of its own but otherwise I don't see a lot of benefit in doing the same for Torrents for instance.

Note that all dependencies in the graph above remain hierarchical as they should always be. The automated layout of the graph tends to make it look as if there was some nonsense going on perhaps with that seemingly horizontal line going from OAEP to Keccak, but that's just an artefact of positioning. In reality, Keccak is on a lower level than OAEP, being simply a hashing utility, although one that is most useful indeed. At any rate, OAEP uses Keccak and there is no dependency going the wrong way, as Keccak itself uses only raw_io and raw_types.

Hopefully this gives enough of an overview to have some idea as to what is where and how the whole fits together. If you have though further questions on it, feel free to ask in the comments below and I'll gladly answer.

Finally, if you made it all the way here and would still rather see a less schematic picture as well, here's a fresh one of the client in action at a meeting of like-minded creatures of Eulora2, surprised as they were by all the screenshooting commotion: 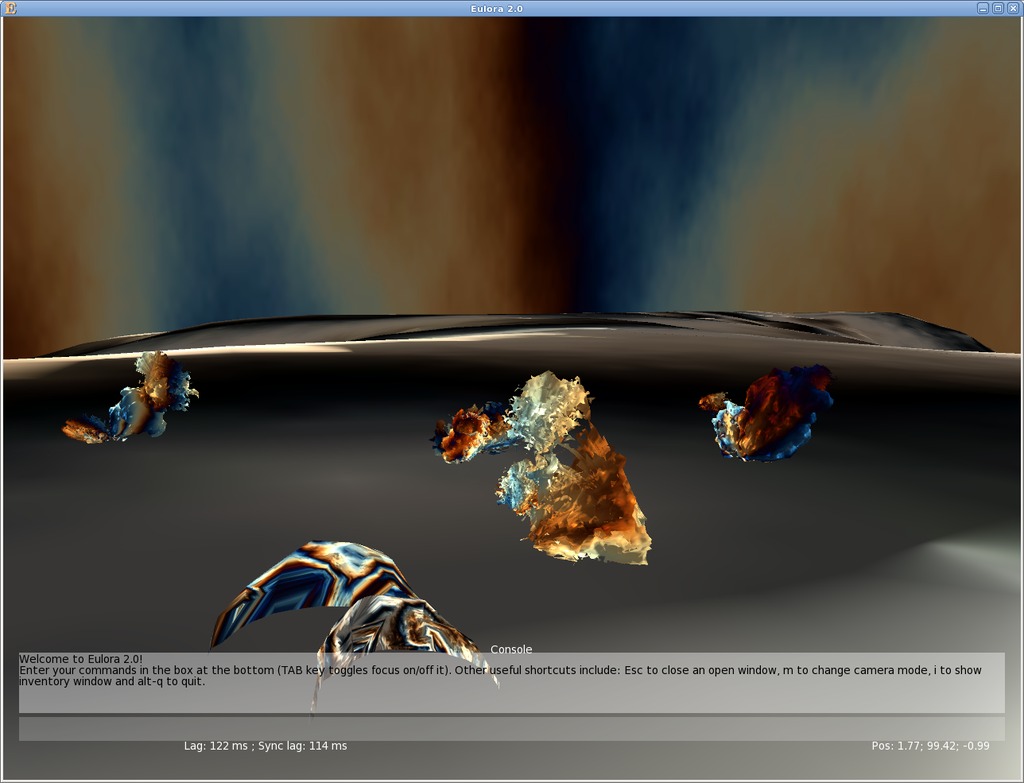 4 Responses to “The Client for Eulora2 in Glorious Detail (and Picture!)”