Two silky threads, one red, one white, twisted together and tied in a little bow around some small, colourful trinket, like so: 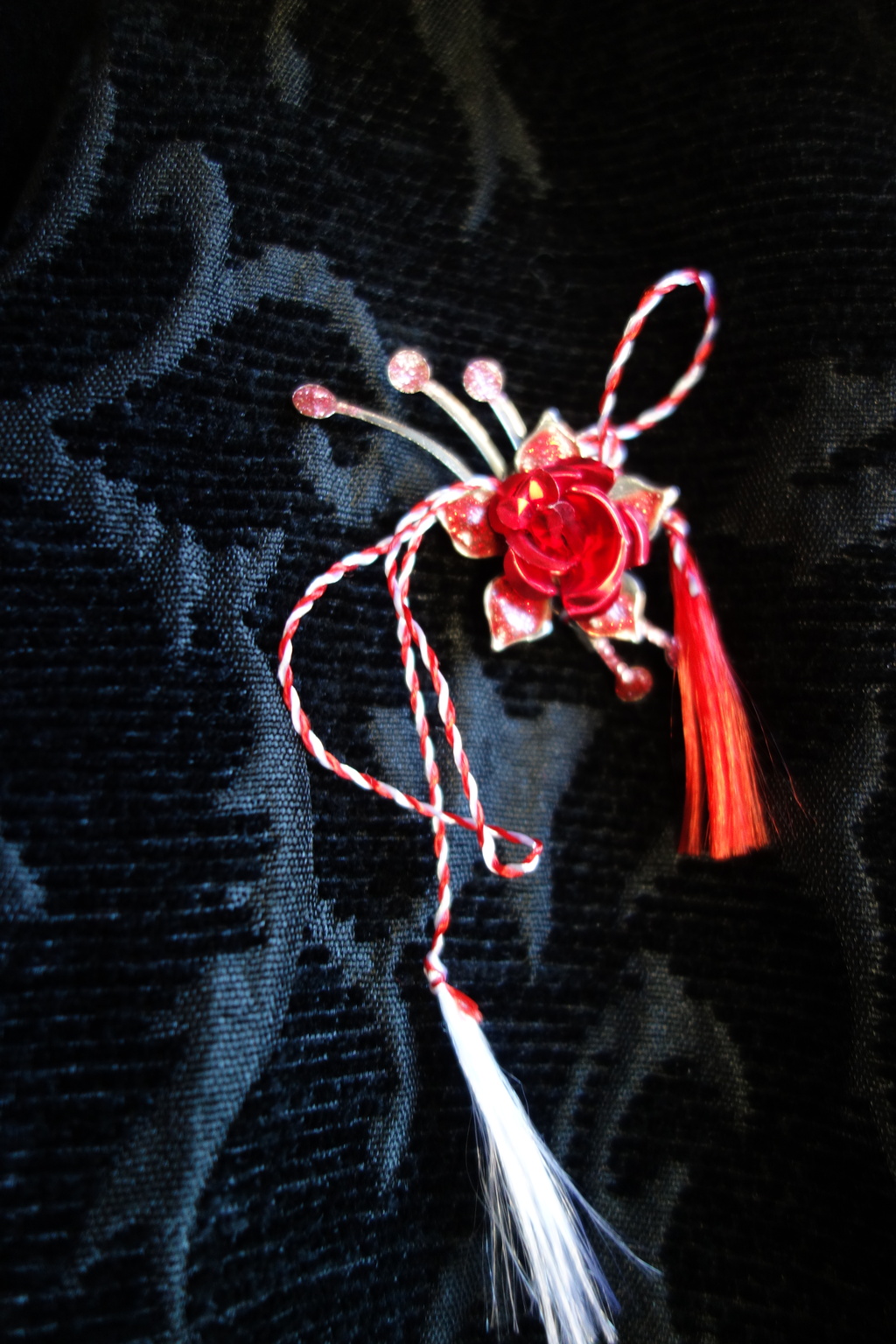 That's a Romanian "Martisor"1 and it's given by men to women2 on the 1st of March as a sign of friendship, of appreciation, of happiness at making it out of yet another winter or more generally of whatever any individual might want to make out of it. And I find myself still wearing one on my coat for each first week of March, though one of my own picking nowadays, mostly as a reminder. The exact reminded part itself seems to change a bit as each year passes but that's no surprise to me at all.

When I was little, those Martisor were for me -for all their cheapness and falsity perhaps and whatever else you might want to call them otherwise- a very welcome bit of colour, warmth, light and even smiles in what seemed otherwise the unrelenting and unending exact opposite of all of those. I know there's no way you'll fully get this if you haven't lived through the same years in the same place among the same people - and possibly not even if you have, for memory is such a fickle and personal thing and all that. But I'm writing it down here nevertheless, mainly for my own record and for setting it down explicitly - even if it's indeed after all those years.

The gray and drab of those times came out, indeed was *made out of* much more than just the bare concrete of stacked up cubes passing for blocks of flats. It was made mainly from lack. The lack of something worth having, from books worth reading - they came packed in a bunch so you'd have to get 10 shitty ones for the 1 possibly passable, if you found that one at all anyway - to food worth eating, to friends worth having3.

I don't think I can quite forget those half-putrid frozen mackerels that were just about the only "fish" that you could buy in the shop or the already-green-tinged salami that would give me the hives anyway (literally and no wonder at that). And more than that, I can't forget the cold that had me sleeping at times with a fur hat on, the homeworks I did at candle light and more generally the dark that would come down over the whole town without notice or pattern of the exact time but on most evenings anyway, not for lack of street lamps but for lack of electricity - my hometown being an industrial town with several active and large petrol refineries, the residential needs were last on the list and so usually going unmet since why would they be met anyway, not like anyone would *do* anything about it.

While not actually doing anything about it that I could notice at all, people reacted nevertheless to all the above. And the main reaction that I could easily perceive was one of adding more to - or perhaps the very main source of - the grayness in the end - the meanness and the closed, drab faces waiting in the endless queues, talking instead of working or doing the work with the same disdain and almost hatred that they seemed to have for everything and especially for anyone -for the very few ones- trying to escape the grayness and the dullness. Pushing one another for a little space in the overcrowded bus or for a loaf of bread when the remaining loaves were clearly fewer than the people remaining in the queue and otherwise -for as long as you did not challenge any of their expectations, of course- being all friendly and welcoming indoors except almost always at the most superficial level of stuffing you with a food that you could even quite guess in advance, in a decor that you'd know in advance, on a background of concerns and smalltalk that you'd also - like everything else, if you paid any attention to it - know in advance for there was mostly one -or sometimes less- of everything.

I don't say all this to complain of anything that was - it was and I lived through it so I want it said plainly, that's all. There were of course a few exceptions to the above, all the more notable for it and invariably, having all the more scars and others' hatred to show for it, too, unsurprisingly. But their stories are for another time.

For now and for the beginning of every spring, I still wear on my coat the small red and white thread with a little trinket of my own choice, as a reminder of all that was and may even be again, it's not as hard as it may seem. And for this year, I wear it as a very simple reminder of how much gray I carried through long time ago - so much gray that this same tiny trinket that passes almost unnoticed in the bright lights of today seemed nevertheless at that time, even if only for a little time, one of the brightest and most colourful things around.

May you have a colourful and happy spring and may you always fully know the value of what you have, too.