Having set Eulora's soil in stone (and grass and sand), I turned my attention this week to the waters that should naturally be found around an island - if it's meant to be any sort of island at all. You know, those deep-deep euloran waters that hold all sorts of resources and unexpected benefits.

Last time I looked at water generation, I considered it had to be nothing other than some specific use of the procedural texture that CS supposedly provides for water rendering. A closer look at the corresponding CS plugin code1 revealed however that it's yet another very specialised thing to the extent that it comes with methods for making "puddles" at a given point - supposedly what the surface should look like if you throw something into the water. At the core of it though, the whole "procedural texture" shtick is an animated texture aka a set of direct writings/changes to the render buffers using the engine's "ticks" as time units to play the desired sequence. Given this rather disappointing find, I don't quite see any strong reason to import into SMG's protocol those "procedural textures" as they are currently in CS, they seem to be utterly focused on client side rendering again and as such entirely client's concern and choice.

Having set to rest my hopes of procedural water generation, I turned to the existing client's pile of .xml files to extract from there just what and how it defines this water thing anyway, since the whole idea is to use whatever is currently in use, right? So in I went and here's what I gathered:

With all the above set, the rest was simply a matter of writing the code to create then the default water precisely as defined in the current xml, only using CS directly from code and without requiring any xml at all. There were a few funny steps on the way including the water with error texture when I had to test that ani file just in case it could be loaded somehow: 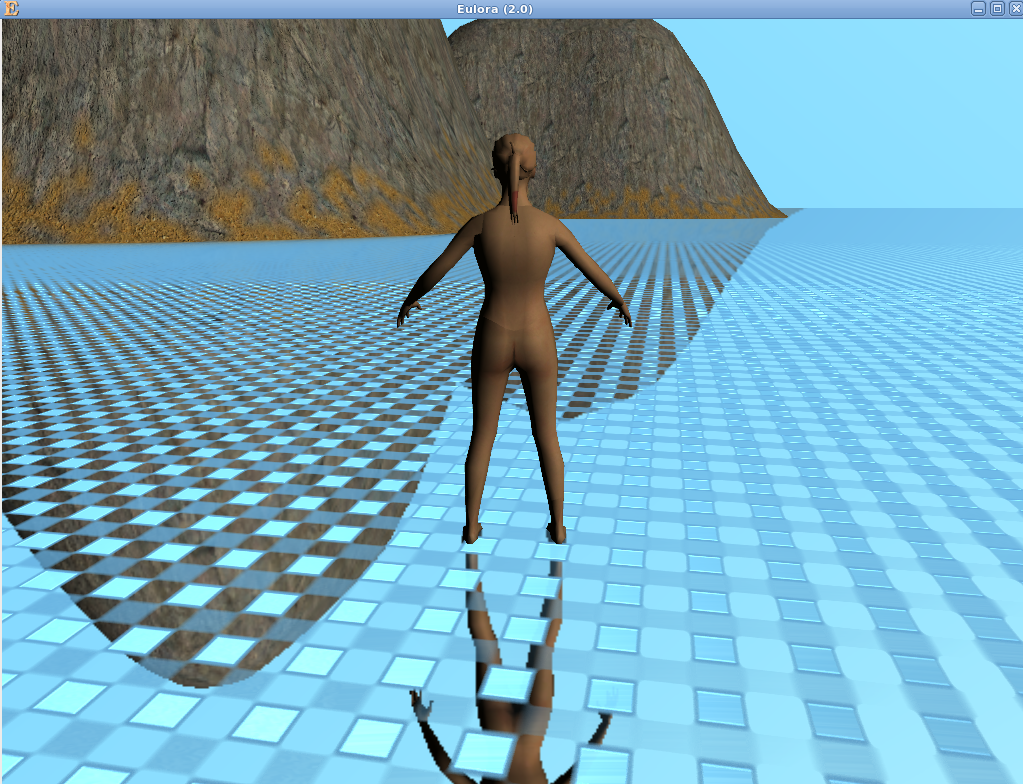 Then the part where Foxy walked on water because the xml had this tag "colldet" that you might be forgiven to think it means adding collision detection as silly as that may sound when you render water - of course it does not mean such a simple thing; what it means is that you should *toggle* collision detection on if it's off and off if it's on and of course you just...know what it is anyway, right? It's also with a different water "normals" texture that I tried for testing purposes and it doesn't even look all *that* bad although the clear repetition is rather grating to my eyes:

And some funny legs reflections that are for now still in there, mainly because apparently that's how Foxy's current shape ends up reflected currently: 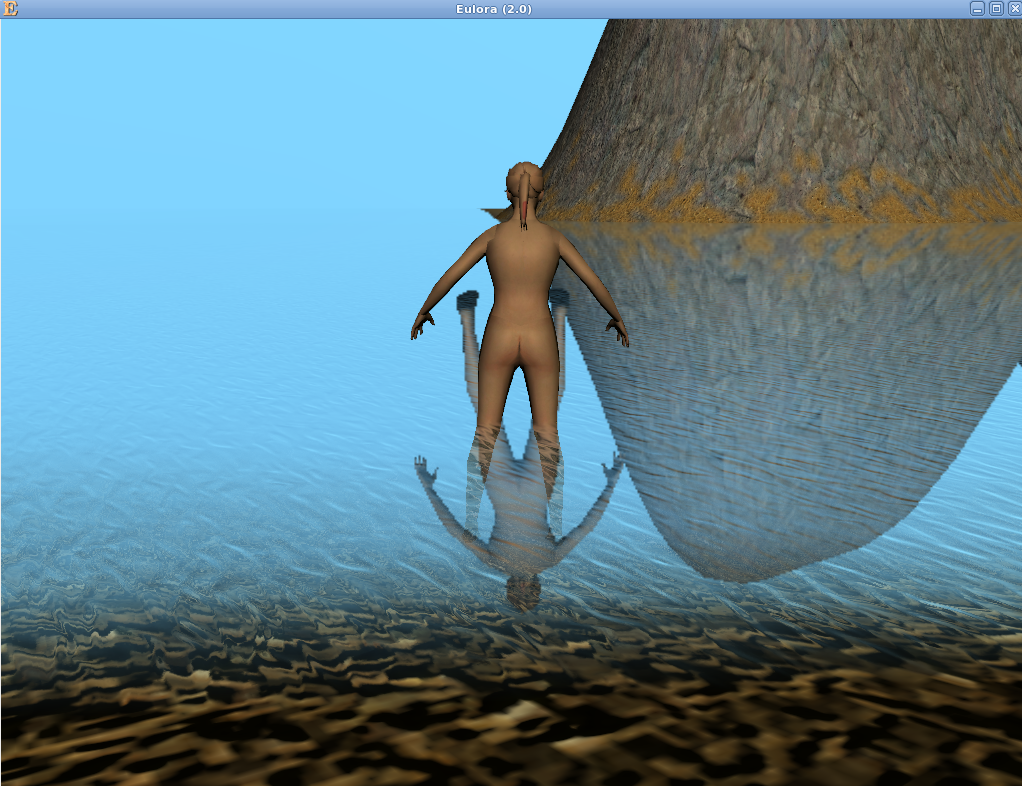 Finally, here's also an even reasonable shot of Foxy getting out of the water on to the Euloran harsh and unforgiving sand: 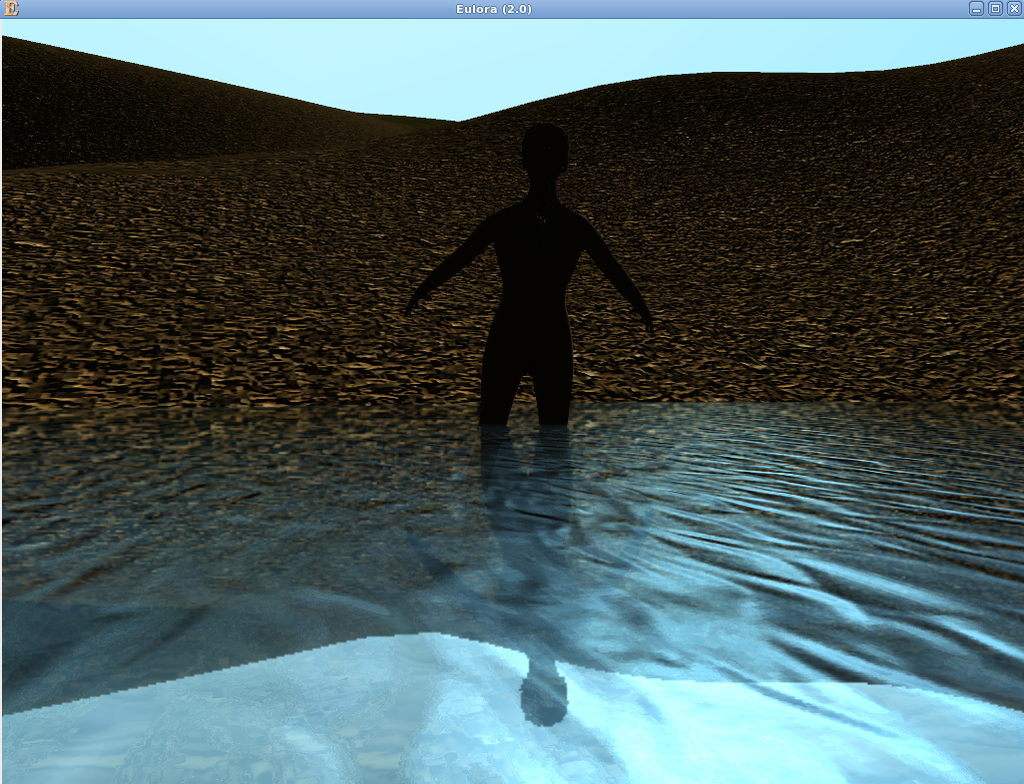 An interesting thing to note with this water-plane approach is the fact that it's currently... in the way of light at times so it introduces weird "dark" effects in places on the island. For the time being I'm not too bothered about it since it might anyway end up sorted when I look into default lights and moreover, it's again both a client-side concern only and the exact way in which the existing client works anyway. This being said, I still think this whole water-plane thing is silly - especially given that once you get inside the water fully, there's of course just... air aka "no water inside the water". Ain't this just a great illustration of how modern stuff turns out to be at a closer look, various sorts of no water inside water, right?