Notes on Graphics for Eulora

Eulora's client uses the CrystalSpace (CS) engine for all its graphics needs and CS in turn uses the Cal3D library for animated objects in the world1. Some two years ago2 I wrote this stop-gap glue-and-string script to supposedly help artists and all those eager to contribute but held back by a lack of direct way to experiment and see their "art" coming alive in CS. Well, I wrote it and until the beginning of this month, those scripts plus some basic notions from introductory computer graphics courses taken way back during my uni years were about as much as I could say I actually knew regarding computer graphics.

As it seems quite conceivable by now that I'll end up having to get all the way to the bottom of the graphics pit too, I spent most of this month reading the graphics reference book3 and in parallel trying to make sense in a very practical way of the whole way in which Eulora's client handles all the graphics part from the Planeshift (PS) top layer down to CS and CAL3D. And while I don't yet have a fully working new pipeline for actually loading on the fly all and any sorts of graphics into Eulora's client, I have at least a hard-won better understanding of what goes on in there (despite the layers upon layers of obfuscation) as well as some bits and pieces that might conceivably even make it into such a pipeline in the end. So I'll jot down here my findings so far and those yet-moving ideas about it all, as it helps for sure to structure and unload a bit in preparation for the next stage of work. And it might even help - says ever optimistic me - to start perhaps a discussion with anyone who knows this better than I do so if that's you, kindly comment below and let me know your thoughts.

One difficulty with CS (and it seems to me with Computer Graphics in general really) is this persistent idea of accomodating all sorts of "alternative" ways of doing things that turn out in fact to be precisely the same thing only packaged differently so that nobody is left behind or something. So instead of having a clear structure of knowledge to acquire, one is supposedly left to be creative and find what "feels natural" or "comfortable" to them. Well, so much for actually learning anything there, welcome to lots of code that does the same thing, only it's harder to tell that upfront without sinking hours in it, to follow it all from one end to the other. Nevertheless, after all the reading and poking it and changing it and having my way with it, my current basic structure of CS4 notions of interest for client graphics is this (ordered from top down, as much as I could):

In addition to the list above, there would be also the easier part of interface "skin" aka the variious icons and decorations for windows, buttons, labels and whatnots. This part is also on the list to be made fully reliable on data received from EuCache but so far I haven't touched it yet (other than keeping an eye out for what I could do about it, whenever other bits and pieces make me go close to that part of the code that has anything to do with it, of course).

For a fresh image, the TestChar at least moved out of its cubic box and into a rather faceted sphere, in his quest for the promised infinite landscape. Lights got a bit better, shader variables were sorted so as to neither block nor directly crash CS anymore. Next on the list is fully figuring out just how to properly feed "geometry" to CS as what it is, namely several sets of numbers (vertices, texels, normals, triangles) rather than all those + a ton of xml on top. This is a required step in order to have the GetFactory prototype too for static meshes at least. Once that is done, the next step is to move on to factories for terrain and then for animated meshes. Until then though, here's Test-in-his-sphere: 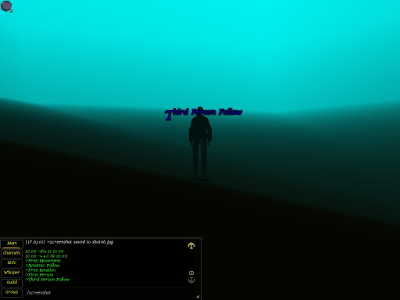 5 Responses to “Notes on Graphics for Eulora”