As the latest client data hierarchy draft revealed a gaping hole regarding the exact use and requirements of "effects", I've spent those past days diving into the tediousness of "particle systems" - those are the core of CS effects since they are used to simulate rain, snow, explosions, fires, fountains etc. On the bright side, particle systems are actually explained in a bit more detail than other things in the CS manual, mainly because they have been apparently changed quite significantly so the manual's author felt the need to provide examples for using the new code. On the darker side, they are stuffed into the clunky system of various plugins + xml + factories + meshes + shaders + 1001 attributes to set for the smallest thing, so that 3 drops of rain get you sweating and swearing through the usual multiple layers of all-possible-things in slightly-different-ways.

To start with, trying to find a proper place where those particle systems belong in a sane hierarchy of CS items is rather dubious because particle systems are a combination of almost everything in there plus "emitters" and "effectors". And ~everything has to do the dance of factory+instance although each time pretty much everything gets re-set anyway1 so it all feels like an exercise in bureaucratic-coding, to make one's stomach heave anew. Anyway, the core components of particle systems are those:

Once a particle system is created, the way it works is relatively straightforward: the engine calls on every frame the update loop of each particle system that is visible to the user; the update loop deletes old particles, polls all emitters to emit new particles, polls all effectors to apply their effects and then performs the final transformations if/when such are required. Basically a particle system is designed as a sort of predefined show happening at some place in the world for some specified interval of time with rectangle-shaped actors only (but possibly various costumes via materials).

For practical tests, I've created from code several types of particle systems including "rain", "fountain" and "fire". While the general mechanics of it all seem to work fine and the parameters seem to do indeed what is expected, there is still some weird issue with the materials - all the stuff looks brown-ish, no matter what texture or material is loaded. Since otherwise a material is just a material and it's clearly loading fine for anything else, I quite suspect that the trouble here is the shader: although in principle any shader could be used, there is a specific particle_shader that is used but not really documented anywhere (ie there is the xml of course but that has some variables and possibly references and it is *one* area that I rather avoided to fully get into, so far). Added on top of all previous experience, I'd rather say that sooner or later I will still have to dig shaders too, what can I do. Anyways, at the moment I am mostly interested in having the mechanics in place and figuring out the parameters, so in this sense it's a success, here's some snow and rain falling down on naked girl, at times with erupting particles too: 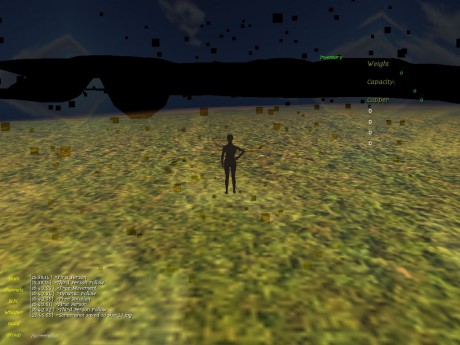 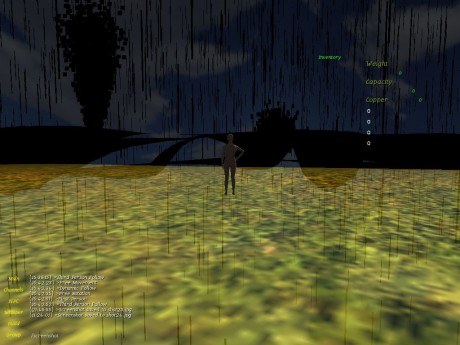 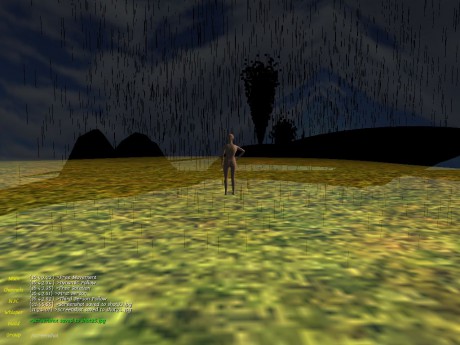 Let it rain with brownish nothings.

Given the above, I'll mark the "particle systems (Air)" as explored for now and move on to procedural textures (Water) to see what further catralliard of parameters I find there too. The test of movement for effects (ie following a char or something) is still on the list too but I see it as more general really - since the whole particle system is simply a mesh, having it follow another mesh should be just a matter of giving its position as relative to that rather than absolute. At the moment I'm not sure where exactly would be the best place to do this but I think it requires a bit more consideration because it's possibly a more generally useful thing to have - some items/characters might simply follow others at some point/for some time, anyway.