A Visit at the Recycling of War Artefacts Museum

His name was H. and he was made to fly. H. flew sometimes for fun, sometimes for duty and nobody really stopped to separate the two - how did it matter whether or when it was one or the other, anyway? After all, H. had made loops in the air when followed by the eyes of children waving flags but also when trying to avoid a quite different type of followers. In between flights though, there was also a lot of travel on land and on sea, chasing the next possibility to fly and getting in the process a lot of markings from all the travel and from all the chasing. But it was in the end a simple fire after taxying that kept Harrier ZD4611 down long enough for it to be declared the past and rather than repaired, just hung on ropes at the museum, in a bit of a mixed-up exhibition, next to a bomb of previous times: 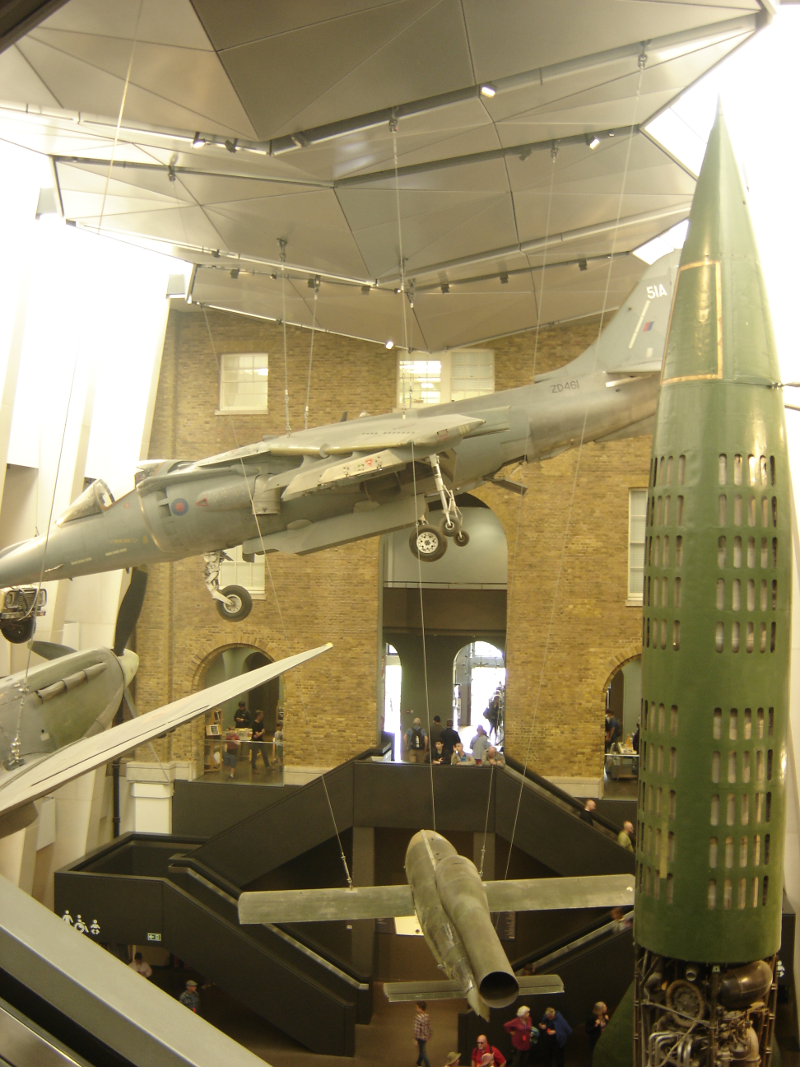 We visited the Imperial War Museum in London (IWR) at the end of June this year but I never bothered to write down anything about it - it's a bit of a mix really with some interesting bits (there are Robert Capa's photos taken during the landing of American troops on the beach in Normandy on 6th June 1944; there are also regular events with WW2 veterans - at times and depending on your luck, you might get a glimpse of what they made of it), some reasonable parts (I hadn't seen the insides of a bomb before) and some terribly propagandistic stuff - at times the three are even mixed, what can you do. As I was clearing up my old camera today, the few pictures I took at the time (and promptly forgot about) came to light and so here's the entrance too, from the only awkward angle I could find at the time to avoid having some t-shirt clad icecream eater in the picture: 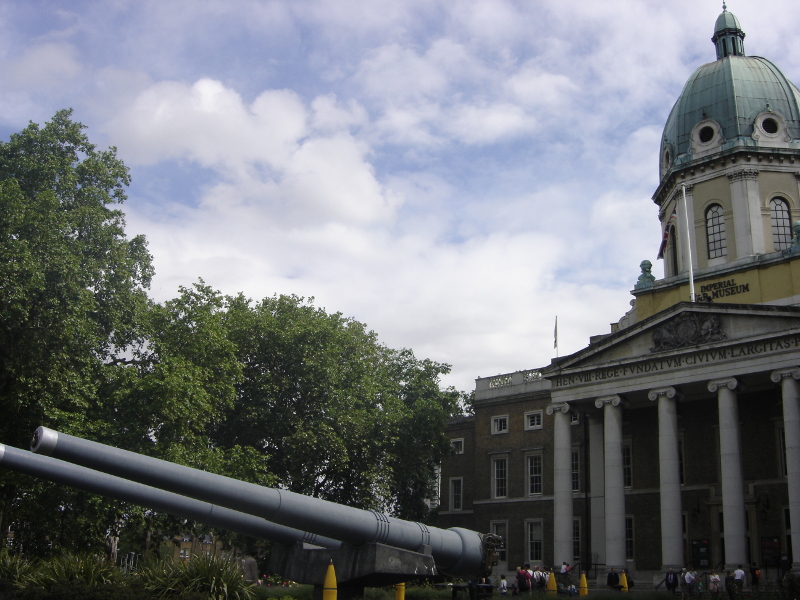 Barrels of 2 naval guns stranded on land in front of the former-hospital that is now the Imperial War Museum in London.

The entrance though is quite representative of the whole place - it makes me think more of recycling and propagandistic posing than of war itself (then again, everything is indeed forever recycled and arguably propaganda of one sort or another too). The building itself is a former hospital that recycled in the 19th century the Ionic for its columns. The two guns pointing away from it are barrels of naval guns taken from 2 different ships - the link being that both shot at least once during WW2. The shells are planted in neat rows for framing the picture I suppose and serve inevitably as climbing/sitting places for bored children. Mine liked at least the guns (they are BIG) but wasn't impressed by the shells (why are they yellow?). He liked the aeroplanes inside but that's be default currently - if it's an aeroplane, then and therefore it is interesting. And he listened politely to the old man telling his story of what it was like living as a child in London during the war, bombings and deaths and then evacuation and all. After which he raised his hand and waited his turn and asked of course about the one thing that was indeed most interesting from his point of view: *what* was inside this bomb exactly and *how* did it work?