The Mirror Land (Notes on Graphics for Eulora, III)

Getting some actual landscape as in getting the height right turns out to be only half (the reasonably well-working half) of the terrain task: once I had in place at least the generic mechanism for creating factories and meshes, the terrain factory required only a few iterations, false starts and mandatory dives into CS's entrails to get working and save Testy from his usual fall into the sky-sphere: 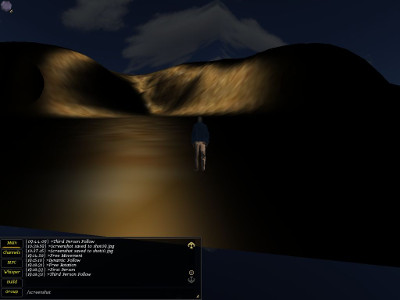 After setting up the lighting a bit better too, it looks even more reasonable (next to the crater that is currently empty, yes): 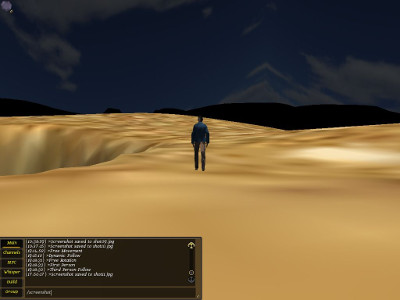 The truly frustrating bit turns out to be the painting of the landscape in the desired materials. For the relatively easy part, the Terrain2 construct of CrystalSpace provides a "terraformer" that can be fed a "material palette" (i.e. a set of materials to use) and an indexed image - as a result, the terrain will have a reasonable mixture of the materials depending on heights and an ok fading of the materials into one another where they meet so it doesn't look that terrible, especially once all normals are in place too so that lights stand a chance to work: 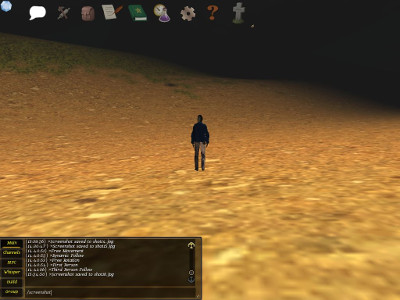 The trouble however is that so far I haven't quite managed to get to the bottom of turning down the reflective mirror-like surface of this landscape! In theory, materials have those 2 light-reflecting properties, namely the extent to which they are "diffuse" or "specular" (i.e. "shiny"). Still, for all my futzing around with those for all three materials (sand, grass, rock), the observed effects are pretty much non-existent. So much for the theory and welcome to this graphics thing of tinkering. To see clearly what I mean, here's a rather surreal rendering with the ambient light turned on to higher levels so it's more obvious (note that the effect is precisely the same even with low ambient light - it's just harder to realise what it is exactly; similarly and as expected, one can mask the effect to the point that "it's fine" by turning on the fog button - it makes sense since it dulls the ambient light, I'd say): 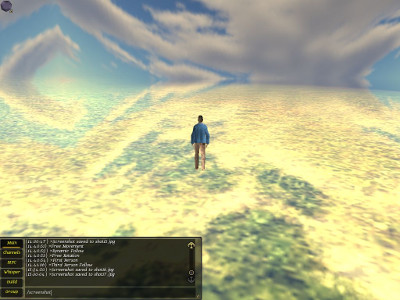 On the positive side, the futzing with lights and whatnots is really something of less concern for me at this moment since I'm not that interested in obtaining an image *just so* - my goal is in figuring out *what* sort of things one can set, what do they do and how to set them while the game is running. In this sense, at least the basics of the terrain seem to be in place for now: heights are read from a heightmap file, the materials are indeed used according to heights, the rest is for another day. I suspect though that in usual tradition, the only real solution here is to dig in the end in that shaders pit as well since it's most probably a shader thing: the terrain object uses a different, terrain-specific shader and for some reason the defaults for that end up producing more of a mirror than a soil, at least given *everything else* (such is graphics, everything and anything can be the culprit). Note that I specifically used and set precisely the same parameters for materials as they are in the client currently in use - so it's most probably something else/somewhere else that I'm not setting just right for now.

The next step now is to figure out animated meshes too, hence Cal3d objects. So in the next episode, it's Testy himself that will change and get created directly from code. Once I have at least one way to do this too, I can go back a bit and look again into integrating them into (or extracting them out of...) the rest of the PS infrastructure. Then again, before doing that, I might still need to dive in and figure out the shaders in more detail to extract some way of specifying them without xml and directly from code too, perhaps. That promises though to be a lot of figuring out and additional mess so depending on whether it can or not wait a bit longer, it might not be exactly next in line - basically I have lots of work competing for my attention, a sort of inverted looking-for-work, it's the... (lots and lots of) work looking for me!

3 Responses to “The Mirror Land (Notes on Graphics for Eulora, III)”