My Talk of Bitcoin at Reading Uni

As mentioned already in the logs1, today I gave a talk for students at Reading University (UK) about Bitcoin. Following the very useful advice from the forum, I centred my talk on "What Is Bitcoin?" and then I built on that with a discussion of actual innovation in Bitcoin (WoT, V, Deedbot) as opposed to the attempts at subversion of Bitcoin ("blockchain technologiezzz") that are usually touted about as "innovative!!" by all those "involved" through mere talking and repeated mentioning of all the buzz words in whatever happens to be the current consensus-approved sequence. Since there is no recording of the talk2 I decided it's best to do this write-up now, while everything is still quite clear in my memory. Who knows - it might help someone else who is looking to actually understand this Bitcoin thing rather than just copy/paste the most commonly copy/pasted stuff.

Initially the University had this bright approach to schedulling of talks and rooms so that they could not even guarantee that I'd have some sort (any sort!) of board on which to write during the talk and so I decided to make the most of it and make some supporting slides, despite the fact that I rather hate doing those things. Nevertheless, I've made them now so you can download the slides for this talk - just be aware that they are meant precisely to support the talk not to replace it so they don't actually contain even 10% of the talk, they just help *illustrate* what I say. So no, here as everywhere else, you can't really replace the person doing the talk and not see any difference, such is life, totally unfair. I'll try though to summarize in here the main ideas I covered - keep in mind that the whole talk was 90 minutes, of which I'd say about 30 minutes were Q&A throughout (i.e. not all at the end, as I took questions as and when they were able to actually ask something). 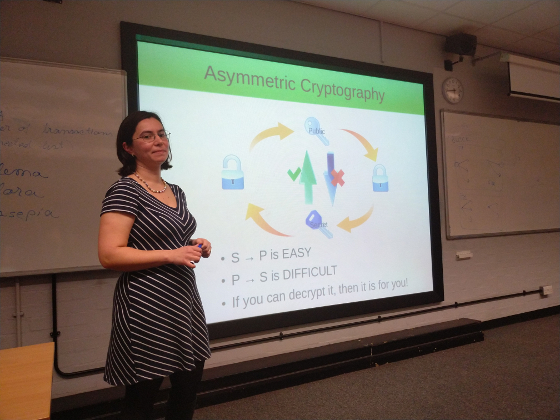 After an initial brief presentation of myself and Minigame establishing some basis on which I am actually giving this talk, I collected the existing "definitions" that students had about Bitcoin. As expected, they were not much in terms of meaning but surprisingly enough they were also rather difficult to extract - perhaps shyness or in a more optimist interpretation some well-placed notion that no, they don't actually have any idea what the thing is. Anyway, for the record, I got only two definitions: "a very volatile currency" and "an immutable ledger of transactions." So I noted that those touch a teeny tiny bit on what Bitcoin has in common with "currency" and "ledger of transactions" respectively while missing at the same time the much wider part of what is actually new, different and essentially disruptive about it. And I noted that the only way to actually get an idea of a complex notion (such as Bitcoin) as a whole, is by starting from its basic principles and following their characteristics and implications. So without further digression, I moved on to enumerating the 4 basic principles of Bitcoin (asymmetric cryptography, databases, peer-to-peer (p2p) and anonymity/pseudonimity) and then presenting each of them in turn.

For explaining asymmetric cryptography, I used Mircea Popescu's excellent approach of starting with the simple example of obtaining the 2 prime factors of a given number vs obtaining the number itself from those 2 prime factors when they are known. I took though rather bigger numbers because my audience was - it is to be hoped at least - made of people able to use their computers for such a task at short notice (I hope!). Based on this, I introduced the notion of public and secret (private) key, using the slides to graphically build up the whole thing piece by piece, aka keys, arrows, locks and all that bling. Basically I showed them a mini animated cartoon, what! And I'd say it worked - I could clearly see some ears pricking up!

Following on from the above, I discussed how that makes it possible to send messages without divulging the content but also without divulging the intended target either! Cue more animated cartoons with people simply trying to decrypt messages from a pile until they find the one (or at least one) that they *can* decrypt with their private key - hence, if they can decrypt it, then (and only then), it is meant for them! At this point they actually started to sit straighter and even nod from time to time as it - apparently - made sense. I finished this first part with a summary of what I had said so far, essentially the slide behind me in that picture.

The database and p2p principles I covered much faster as it was really just the main ideas that were of most interest to me for the task at hand: a database is essentially structure applied to data and that means any structure; p2p allows participants to find and obtain all the different parts of information out of a given set, without having to rely on any central authority /middle man but simply by communicating and interacting with the other participants. Nevertheless, p2p was also good for another mini-cartoon to illustrate that one needs to be able to assess what part of the whole they might have at any given time, what parts they are missing and to what degree a proposed part is what they are looking for.

After this brief interlude of databases+p2p I got back to building on the asymmetric cryptography introduced earlier aka introducing anonymity and pseudonimity. As the students were by now rather intently listening, I asked them what they could tell about those 3 messages on slide 30: there are 3 signed messages (encrypted with secret keys) of which 2 verify (decrypt correctly) and one doesn't verify with one given public key. After a few hesitations and false starts, they actually got it - yes, one can say that both that decrypt correctly were actually encrypted with the *same* private key! So I took this further and pointed out that this implies authorship (the one controlling the pair of this public key is the author of the first 2 messages), continuity (whoever signed the first message, also signed the second) and repudiability - one can easily prove that they did NOT sign the 3rd message! All very useful things since together they allow one to obtain pseudonimity - in other words, to have a way of gaining authorship and continuity without having to give up privacy and mix up in there personal information such as date of birth or where they hang out with friends on a Saturday night. So no more of "verify your identity by giving us the keys to your house and generally whatever else we might think of asking". Instead, pseudonimity by means of public/private keypair - one neat and simple way of enjoying the results of your work (aka building your reputation) without having to give up more private information than you choose to. This was the first time I mentioned reputation and I took the time to give a few examples since I was preparing the ground for the WoT later on. Judging by the large amount of questions that the WoT sparked, I'd say it hit home.

Putting everything together, I showed this boring slide 36 with classic bullet points. To make up for it and to check to some extent how much of the head-nodding actually meant some sort of understanding, I asked the students to identify in that definition what exactly "caused" each of those main characteristics listed there. They were fine with p2p -> no middle/central authority and they worked their way on pseudonimity. I explained the other two (reputation vs blind trust; irreversibility) in more detail since there were some important aspects there that weren't apparently all that obvious - including the "trust" in banks and governments and parents and what-not. Basically when many still trust without even realising that they really just ..."believe" and nothing more.

For the next step, I pointed out that innovation with/in Bitcoin is simply something that *maintains* all those main characteristics of Bitcoin while attempting otherwise to adapt the world ("how things are done") to it and NOT the other way around. By contrast, anything that tries to chip away even in the slightest at *any* of those main characteristics is nothing more but an attempt at subversion. As soon as one tries to change Bitcoin to fit the world ("what people expect/need/want"), one is - whether they admit it or not, whether they know it or not - trying to subvert Bitcoin, not innovate with it. So the difference being clear and easy enough to make hopefully, one can tell for anything whether it's innovation or subversion and they can then *also* tell whether the author is at least honest about it! At which point of course, they can therefore update the reputation of this author... even quite publicly if they are using the WoT!

From this point on I went online to show the WoT and V directly, exploring it a bit and discussing the actual meaning and use of the WoT and then linking it to deedbot and the voice system + wallet in #trilema. By this point there were several hands raised at the same time so questions started to really pickup. Quite a good number of questions focused on the "but it's not fair" aspect of an existing WoT + a signed-patches-only V:

There were in fact many other questions but those are the ones that I think are rather usual so the answers can help others perhaps as well as the students who asked them this time. Obviously, the answers given above are those given at a talk - without the time to go deeper into details and without the luxury of linking related logs/posts from the abundant existing materials. I still did point out to students that there is much more to read on the subject both in the logs (which I demonstrated a bit) and on the TMSR blogs but whether they will do any reading of this sort or not is entirely up to them - since the benefits to reap for doing so as well as the losses to enjoy for failing to do so will also be for each of them personally and only for them.

All I can say is that I'm genuinely rather curious whether any of them gets to actually register a key and do something with it, now that they nodded at the talk, they asked the questions, they came at the end to me to say that they liked the talk and now that they have in front of them this opening, this way to get into it all6 - for as long as they actually have it, of course, since nothing is for ever!

4 Responses to “My Talk of Bitcoin at Reading Uni”